From Heraldry of the World
Your site history : Usingen
Jump to navigation Jump to search 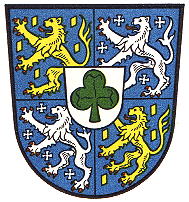 Usingen became a city around 1350. The oldest seal is mentioned, but no examples exist anymore. The second seal dates from around 1277 and shows a quartered shield with the lions of Nassau (I and IV) and Saarbrücken (II and III), as the town was ruled at the time by the counts of Nassau-Saarbrücken. The small additions to the lions, billets and crosses, disappear later and do not return until 1935 when the present arms were granted.

Later seals of the city do no longer show the lions, a 17th century seal simply shows a city wall. Similarly, the city used a trefoil as its symbol in some smaller seals as well in buildings and fountains. This trefoil was placed as an escutcheon on the lions in 1935.