From Heraldry of the World
Your site history : Vale Royal
Jump to navigation Jump to search 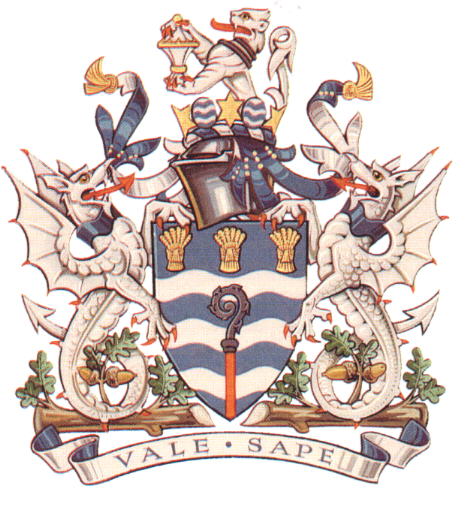 Arms : Barry wavy of six Argent and Azure issuant from the base an Abbot's Crosier Gules headed Sable on a Chief wavy Azure three Garbs Or.
Crest : On a Wreath of the Colours out of a Circlet of four Mullets of six points Or and four Fountains alternately a demi Lion Argent gorged with a Collar gemel Sable and holding between the paws a covered Salt Argent garnished Or.
Supporters : On either side a Wyvern Argent gorged with a Collar wavy Azure and sejant erect upon a Branch of Oak fesswise couped fructed proper.
Motto: 'VALE SAPE' - Be strong or Be wise

The arms were officially granted on March 5, 1985.

The wheatsheaves on the arms are the symbol for Cheshire. The wavy bars represent the Weaver river and its tributaries the Dane and Wheelock rivers. The crosier is taken from the Northwich arms.

The crest shows the stars, taken from the arms of the Brunner family, and the fountains taken from the Monds family, both were part of the Northwich crest. The lion is taken from the Verdin family and was part of the crest of Winsford. The lion holds in its paws the covered salt, or salt cellar with llid, which indicates the long history of salt mining in the area.

The two supporters are two-legged dragons or wyverns, taken from the Northwich arms. The old French name for the wyverns, guivres or wivres, are canting for the Weaver river. This connection is emphasised by the blue wavy collar. The supporters stand on oak branches, which symbolise the Delamare Forest.