From Heraldry of the World
Your site history : Vamdrup
Jump to navigation Jump to search 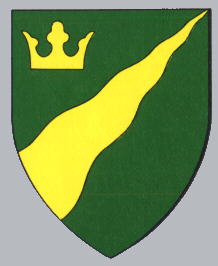 The arms were officially granted in 1966.

The arms show the Kingeå river, flowing through the green fields of the municipality. The crown also refers to the river, which means the King's river. The river was a border between Germany and Denmark from 1864-1920.