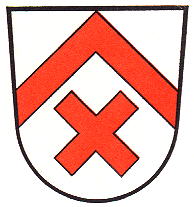 The chevron is derived from the arms of the Counts of Ravensberg, who ruled the area for many centuries. The cross was added as a local symbol, based on a cross on a stone in the center of the town.

Before 1939 the city used the complete arms of Ravensberg, with the three chevrons. These chevrons also appear in the arms of the Halle district. These arms were supposedly granted in 1719 when King Friedrich Wilhelm granted the city rights to Versmold.