From Heraldry of the World
Your site history : Vienenburg
Jump to navigation Jump to search 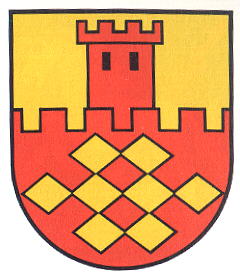 The arms were officially granted in March 1973.

The new arms show the castle taken from the old arms (see below), with now in the base 8 diamonds for the 8 former municipalities which were amalgamated in 1972.

The old arms were officially granted on November 21, 1936.
The arms show the Vienenburg castle, built around 1300 by the Counts of Wernigerode. The municipality used the castle in its seal already before 1936.
The colours are the colours of the State of Hildesheim, to which the town belonged from 1367-1521 and 1643-1802.