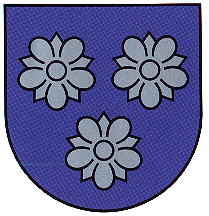 The arms show three medlar flowers, taken from the old arms of Viersen and representing the fact that the city was part of the duchy of Geldern. The medlar is the oldest symbol of Geldern.

The old arms of Viersen showed in the upper half the lion of Geldern, and in the lower a rose. The rose actually should have been a medlar.

The village of Bockert , which never was its own municipality, but a borough of Viersen, adopted arms in 1998 : 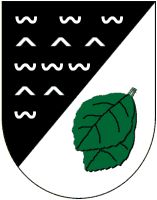 The two beech leaves are canting, Bockert is derived from Buchenholz (beech forest). The two leaves refer to the former hamlets of Ober- and Unterbockert. The colours are those of Prussia (black-silver) and its Rhine province (green-silver), as the village developed under Prussian rule.