From Heraldry of the World
Your site history : Wächtersbach
Jump to navigation Jump to search 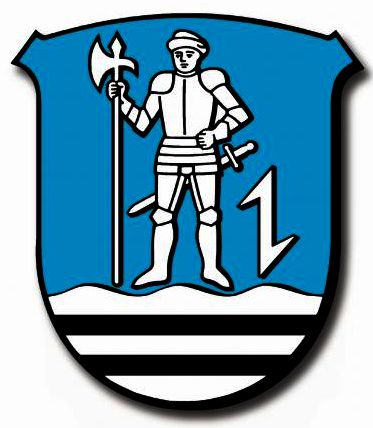 The arms were granted in 1982 and show a canting sentry (Wächter), taken from the historical arms (see below). The base shows a river (bach) with two small black bars. These represent the former county of Isenburg, to which the villages of Hesseldorf, Weilers, Wittgenborn, Waldensberg and Leisenwald historically belonged. Aufenau and Neudorf are represented by the hook, taken from the arms of the Forstmeister von Gelnhausen family, who ruled the villages for a long time. 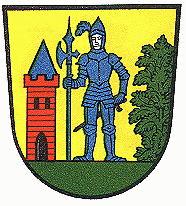 Wächtersbach received city rights in 1404 from the Lords of Isenburg who ruled the city. The local branch of the family later named themselves later Von Wächtersbach. There are no historical seals or images known from the city prior to 1742. The arms first appear on a stone decoration from 1742. The arms already showed the canting knight (Wachter, or sentry) between a tower (the city) and the tree (the woods). The arms also appear on the oldest seal, which also dates from the 18th century.