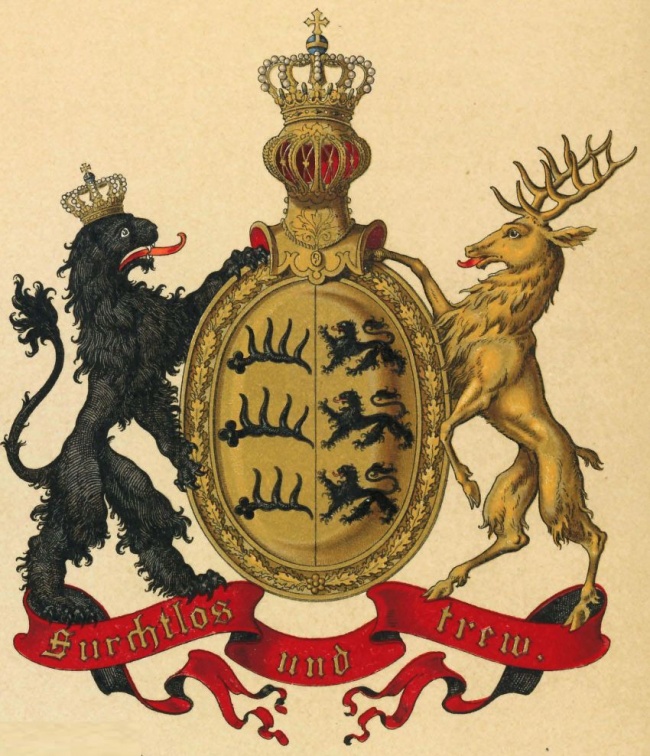 Württemberg was at first a small County in the south-western corner of present Germany, between Esslingen and Bad Cannstatt. The counts became more and more influential and were promoted to Dukes of Württemberg in 1495. In 1806 the territory became the Kingdom of Württemberg. After the first world war the Kingdom lost its independence and became a semi-independent Free-state in the new Republic. After the second world war it was combined with Baden and some additional territories to the State of Baden-Württemberg.

At first the arms were covered by a helmet, and a peacockfeather as a crest. It is known since 1279, but may be older in origin. In the beginning of the 14th century the crest was replaced by a horn, as can be seen in the Zürich roll of arms and the roll of arms of von der Esten. The mantling was red and gold, and may be derived from the counts of Veringen. In the 15th century three feathers were placed in the mouth of the horn, their origin is unknown (this is still seen in the arms of Urach).

In the late 15th century after the acquisition of the county Mömpelgard the arms were quartered with the three fish of Mömpelgard (see Freudenstadt). After the promotion in 1495, the new ducal arms were quartered of Württemberg , Teck (for the county of Teck, see Oberndorf ), and the imperial banner (see Ludwigsburg) and Mömpelgard. Consequently four helmets and crests were used; an eagle for the 'Banneramt', the old horn, a female bust with fish as arms for Mömpelgard and a dog's head for Teck.

In 1693 the arms were further divided after the acquisition of the Lordship Heidenheim, incorporating the heathen's head, both on the shield and on an additional helmet. Later 18th century additions were made for Limpurg, Justingen and Bönnigheim, making the arms rather complicated, but typical for the baroque era.

The newly formed Kingdom of Württemberg continued this line by adding Ellwangen, Schwäbisch Hall and Tübingen as quarters and combining the arms of Württemberg with the three lions of Schwaben on an escutcheon. Schwaben was added as a larger territorial symbol. No helmets were used, but instead the shield was covered with a royal crown, a lion and a deer were used as supporters (representing Schwaben and Württemberg).

For practical reasons, since 1817 smaller arms were used, which were Württemberg paled with Schwaben (see main picture above). A new motto was added, Furchtlos und Treu (Fearless and Loyalty). These arms were used until 1922.

The arms of 1922 were quartered of the old Württemberg arms and the banner of Württemberg, no other territorial arms were included. As supporters two deer were used.

In 1933 the motto was re-introduced, but the semi-independence was lost. After the second world war the area was split in Württemberg-Baden and Südwürttemberg-Hohenzollern. The latter used the arms of the Free State until 1952 when the two territories were combined to Baden-Württemberg.