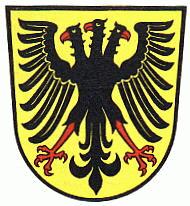 The eagle is taken as a symbol for the Dukes of Schwaben. The three heads symbolise the three former territories that were transformed into the district. The colours are also the colours of Württemberg.