From Heraldry of the World
Your site history : Warburg
Jump to navigation Jump to search 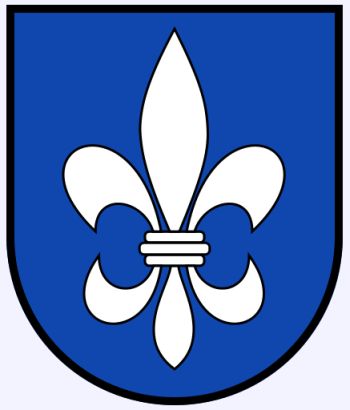 Warburg was already a city in the early 13th century. In the 15th century the Alt- and Neustadt (old and new city) were finally combined into a single city. The oldest seals of the city date from 1254 and 1257 and show a gate in which was standing a bishop. The city belonged to the bishops of Paderborn, so it was likely that the figure was the bishop of Paderborn. In the meantime the fleur-de-lis appeared on the coins of Warburg since 1227. The fleur-de-lis also appeared on smaller seals of the city in the 14th century. The gate only appeared on the great-seals. The fleur-de-lis was also mentioned as the city arms in 1780.

In the early 20th century the arms still showed only the fleur-de-lis. Stadler, however, mentions in the 1960s arms based on the complete old seal. I don't know when the city adopted the larger composition as arms. In 1977 the city returned to the use of the fleur-de-lis.