Arms : Per fess Or and Ermine in chief between two Roses Gules barbed and seeded proper a Lion passant guardant in base six Lioncels rampant three two and one Gules on a chief Azure between two Garbs Or a Pale Sable fimbriated and charged with a Wolf's Head erased Argent.
Crest : On a Wreath Argent and Gules upon a Rock proper a Unicorn forcene Argent armed maned and unguled Or supporting between the forelegs a Sword erect proper hilt pommel and quillons Or.
Motto: 'DEUS DAT INCREMENTUM' - God giveth the increase.

The arms are a combination of symbols from the older arms of the different councils, as well of the two counties, in which the former councils were located; Lancashire and Cheshire (now Warrington is in Cheshire only).

The motto is also taken from the old arms and means "God giveth the increase". 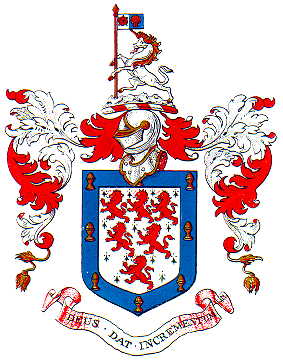 Arms : Ermine six Lioncels rampant three two and one Gules within a Bordure Azure charged with eight Covered Cups Or.
Crest : On a Wreath of the Colours upon a Rock proper a Unicorn rampant Argent armed maned and unguled supporting a Flagstaff Or thereon hoisted a Flag flying to the sinister per pale Argent and Azure charged with a Rose Gules barbed and seeded of the first and a Garb of the second.
Motto: 'DEUS DAT INCREMENTUM' - God giveth the increase.

The ermine shield bearing six lionels symbolises the family of the first Lord of Warrington, Paganus de Vilars, around which is a blue border bearing eight golden covered cups representing the Boteler or Butler family to whom the Manor and Barony of Warrington passed.

The unicorn its that of the Boteler family and the flag bears the emblems of Lancashire and Cheshire, because of Warrington's position on the borders of both counties.