From Heraldry of the World
Your site history : Weddingen
Jump to navigation Jump to search 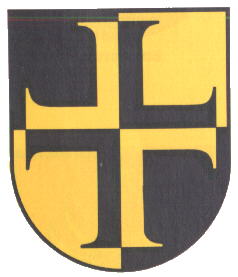 The arms show the cross of the Teutonic Order (Deutsche Orde), as already in the 13th century there was a small chapter of the Order situated in Weddingen. Previously the chapter resided in Goslar. The quartered shield of black and gold symbolizes this, as these are the colours of the city of Goslar.