From Heraldry of the World
Your site history : Wegberg
Jump to navigation Jump to search 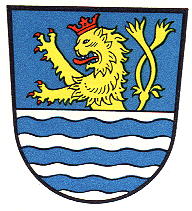 The arms were officially granted onApril 14, 1937.

The upper part of the arms shows the lion of Geldern, as the area belonged to the Duchy of Geldern. The lower part shows wavy bars and represents the former municipality of Beek (Beek means Bach, or stream, brook). The arms were not changed after the merger.

Hupp showed the arms in the 1920s different arms, shown below, which are based on the oldest known seal of the village, dating from the 16th century. The city adopted the composition in the new seal in the early 20th century and Hupp added the colours, which have no historical meaning. The upper part shows St. Peter, the lower a cross. Most likely both refer to the State of Köln (black cross, St. Peter is patron saint of Köln). Next to the saint is a small bread, as during the middle ages, the church distributed small breads to the people.