From Heraldry of the World
Your site history : Wehrheim
Jump to navigation Jump to search 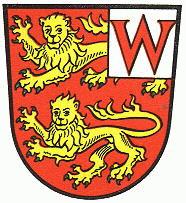 The arms were granted in 1953 and are based on the 15th century seals of the city. The arms show the two lions of the Counts of Diez, who ruled the area until 1388, combined with the initial of the town.

The arms, however, were 'forgotten' in later centuries and in the early 19th century the new seal of the municipality showed a rather strange building with two towers. The building, a Wehrbau (or 'defending building') was a canting symbol. In the end of the 19th century the building was shown in the colours of Diez by Hupp (see below). These arms were used, but never approved, until 1953.