From Heraldry of the World
Your site history : Weida
Jump to navigation Jump to search 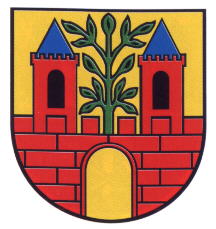 The arms are based on the oldest seal of the city, dating from 1333. The gate and two towers symbolise the fortified character of the city in medieval times (Weida was already mentioned as a city in 1209). The willow (Weide) branch is a canting symbol, which also already appeared on the old seal. The colours were first mentioned in 1515 in a document at present in the Erfurt university library.