From Heraldry of the World
Your site history : Wesel
Jump to navigation Jump to search 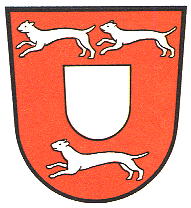 A weasel already appears on the first known seal, which dates from the early 13th century. The main image of the seal shows a gate with Emperor Heinrich VII and Count Theodor of Kleve. Under the gate the weasel is seen. In 1269 on a smaller seal only the weasel appears. Both the large and smaller seals remain similar until the 16th century. In the 14th century arms with three weasels are mentioned (these never appeared on the seals). Around 1600 the weasels are placed on the original arms of the counts of Kleve.