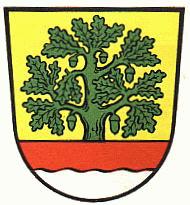 The oak is the legendary oak tree in Hagen, already mentioned in the 13th century as the centre of the local court. The court was held under the tree until 1822. The base of the shield symbolises the Weser river and the coastline, symbolised by a red dike.