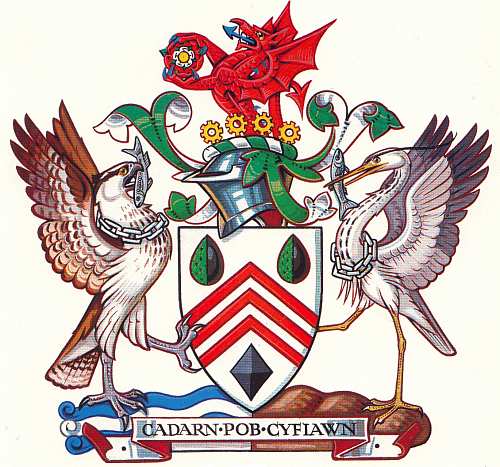 The three red chevronels are the traditional arms of the old princes of Gwyr. About these are arranged three devices two of which comprise a green pine cone dimidiating a goutte sable. This charge refers specifically to the reafforestation projects of the County, symbolised by the pine cone; the goutte is a liquid drop and is coloured black to symbolise oil with reference to the oil refining and attendant industries. The black diamond, represents the coal industry.

The crest consists of a demi-Welsh dragon holding between its fore paws a Tudor rose. This whole device rises behind four annulets embattled on the outer edge all coloured gold. These refer to the four Districts which made up the County and the annulets refer to the industries of each. The dexter (left hand to the viewer) supporter is an osprey holding a fish in its beak, being fauna known to the area. Around its neck is a chain of steel links in reference to the importance of the steel industry to the area. The other supporter consists of a heron with an aluminium collar about its neck representing the aluminium industry, the heron holds in its beak a fish.

The fish of the two supporters refer to the maritimeinterests of the area. The compartment - base under the supporters - consists of water to the dexter being a further reference to the maritime interests and the water harbour for which the area is famous; the other part of the compartment consists of a ploughed field and is a reference to the importance of agriculture in the area.