Incorporated into : 1975 West Lothian District Council of the Lothian Region 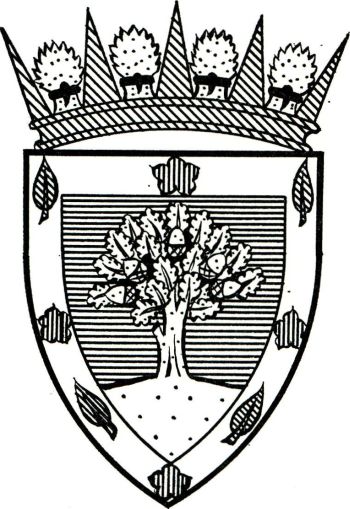 Azure, issuant from a mount in base, an oak tree fructed all Or, a bordure Argent charged with four gillyflowers Gules, alter­ nately with as many laurel leaves slipped Vert.

Which Shield is ensigned of a coronet appropriate to a County Council, videlicet: Issuant from a circlet Vert, five paling piles also Vert, alternately with four garbs Or, banded Sable

The arms show the coat borne, for their Earldom, by the Livingstone Earls of Linlithgow, on an escutcheon en surtout of their shield, but four of the red gillyflowers on the bordure have been replaced by green laurel leaves in reference to the Hope Earls of Hopetoun and Marquesses of Linlithgow who have a green bay leaf in the centre of their arms. 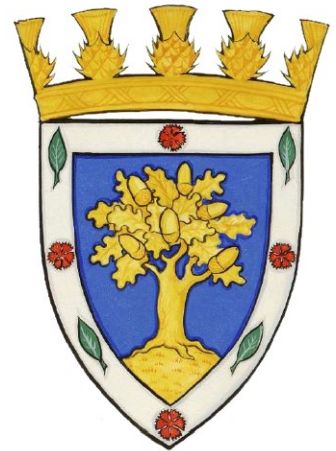 Azure, issuant from a mount in base, an oak tree fructed all Or, a bordure Argent charged with four gillyflowers Gules, alternately with as many laurel leaves slipped Vert.

Above the Shield is placed a coronet appropriate to a statutory District, videlicet:- a circlet richly chased, from which are issuant eight thistle-heads (three and two halves visible) Or

These are the County arms with a crown of a district council. 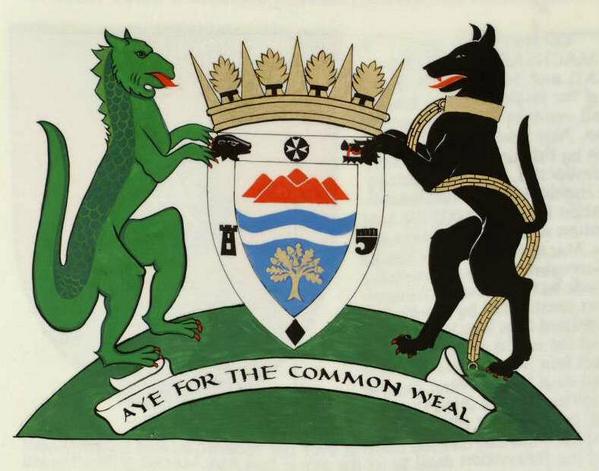 Per fess Argent and Azure, a fess wavy per fess Azure and Argent between in chief a shale bing of five peaks Gules and in base an oak tree fructed issuant from a mount in base Or, a bordure Argent charged in centre chief with a pellet, thereon a Maltese cross Argent, and in base a lozenge Sable, in dexter chief a badger's head erased contournee Proper, in sinister chief a boar's head erased Sable langued Gules, in dexter fess a tower embattled Sable, and in sinister fess a clarion of the Last.

Above the Shield is placed a Coronet appropriate to a statutory Area Council, videlicet:- issuant from a circlet eight paling piles (three and two halves visible) Or and eight garbs (four visible) of the Last, banded Sable; on a Compartment below the Shield are set for Supporters, dexter, a lizard (West Lothiana) Vert, langued and clawed Gules, and sinister, a bitch Sable, langued and clawed Gules, and gorged of a collar to which is affixed a chain passing betwixt the forelegs and reflexed over her back Or, and in an Escrol below the same this Motto "Aye for the Common Weal".

The arms show in chief a representation of the Five Sisters, shale bings which stand on land which was formerly an important centre of the shale-mining industry and which was, in 1995, protected as a national heritage site. This is a reminder that shale-mining was once the staple industry in the area; the five peaks also recall its five principal towns, Linlithgow, Bathgate, Armadale. Whitburn, and Livingston.

The blue/silver wavy fess represents the area's many waterways, including the White Burn, and the gold oak tree in base was the main feature of the District Council's arms (see above).

The charges on the silver bordure all refer to items of special local interest. The maltese cross is for the Knights of St John and their Preceptory at Torphichen, the black lozenge in base for the former coal-mining industry, the badger's head for Broxburn, the boar's head for Bathgate (which means "the boar's wood"), the tower for West Lothian's castles and castellated churches, and the clarion for its celebrated musical culture.

The supporters are the world's oldest known reptile fossil (West Lothiana) which was found near Bathgate a few years ago and the black bitch which featured in the arms of the royal burgh of Linlithgow.

The motto is a free translation of the Bathgate motto.