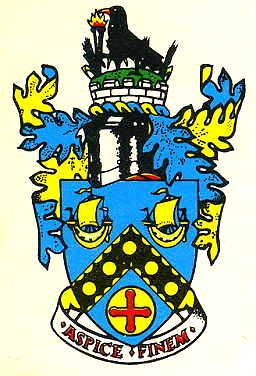 Arms : Azure, on a chevron be­ tween in chief two lymphads in sail, and in base a roundel Or charged with a cross pommy gules, a chevron engrailed sable charged with five bezants.
Crest: On a wreath of the colours, Out of a mural crown argent a mount vert, thereon in front of four ears of wheat, stalked and leaved, a Cornish chough proper supporting in the dexter claw a torch erect sable, enflamed also proper.
Motto: Aspice finem.

The arms were officially granted on December 10, 1953.

The chevron gives a stylized representation of the whole Penwith peninsula. The black chevron on gold gives the County and Duchy liveries, and suggests the shape of the Penwith peninsula with to the South St. Michael's Mount, represented by the traditional cross of St. Michael set on a golden roundel. The bezants or golden roundels are from the arms of the Duchy and County of Cornwall. The two lymphads allude to the fishing and boat building industries.

The mural crown is a common symbol of civic government and the green hill and wheat ears refer to agriculture. The Cornish chough is seen in the County crest and is frequently used to represent Cornwall.

The motto can be translated to allude to the situation of Land's End in the district.