From Heraldry of the World
Your site history : Westport
Jump to navigation Jump to search 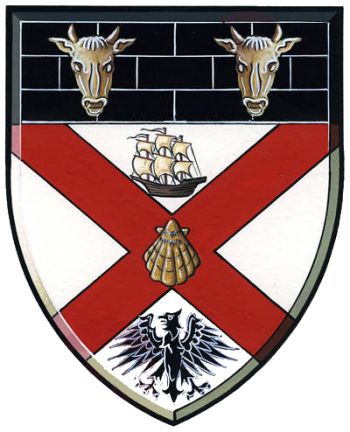 Argent, a saltire gules charged with an escallop or between in chief an ancient ship proper and in base an eagle displayed sable, on a chief of the last masoned of the first two beeves' heads cabossed of the third.

The arms were certified to Westport Urban District Council on 24 September, 1975.

The chief shows the old "Cathair na Mart", the stone fort of the beeves, located by John O'Donovan in Westport Demesne (1837). The site is an archaeological farm settlement. The division of the shield is like the St. Patrick's cross, symbolising the visit of St. Patrick to the parish in the 5th century. The eagle symbolises the Browne family as founders of the new town in 1760, whose crest it is. Cruachan Aigle is also the ancient name of Croagh Patrick. The ship represents the O'Malley's on whose territory the town stands, it also represents the maritime history of the town. The scallop symbolises a place of pilgrimage - i.e. The Croagh Patrick National Pilgrimage.