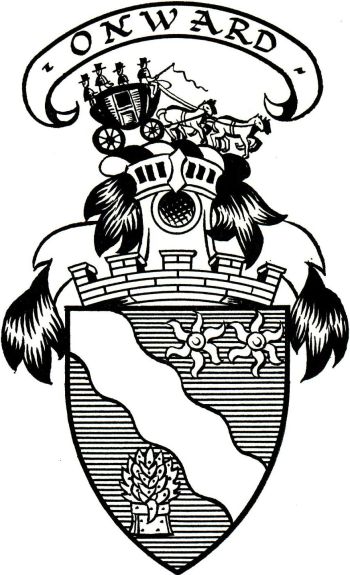 Azure, a bend wavy between two estoiles in chief Argent and a garb in base Or.

Above the Shield is placed a mural coronet thereon a Helmet of befitting degree with a Mantling Azure doubled Argent, and on a Wreath of their Liveries is set for Crest the represen­ tation of a stage coach and four all Proper,t and in an Escrol over the same this Motto "Onward".

Whitburn developed in the early nineteenth century into a prosperous weaving town. This trade, however, gradually decayed, and coal-mining and general trading took its place as the town's main interests.

The arms have the blue and silver colours of Scotland and the silver wavy bar is for the White Burn which gives the town its name.

The two estoiles recall the Baillies of Polkemmet, who have been closely connected with the district since the sixteenth century and have been generous benefactors of the Burgh.

The golden sheaf represents the agricultural interests of this part of West Lothian.

The unusual crest of a stage coach comes from the Burgh seal adopted in 1892. This device was chosen because the old halfway house of the Edinburgh-Glasgow turnpike road was about half-a-mile west of the town, and Whitburn itself was the principal station on the coach route between the two cities, the first service being started in 1678.

The motto also comes from the seal.