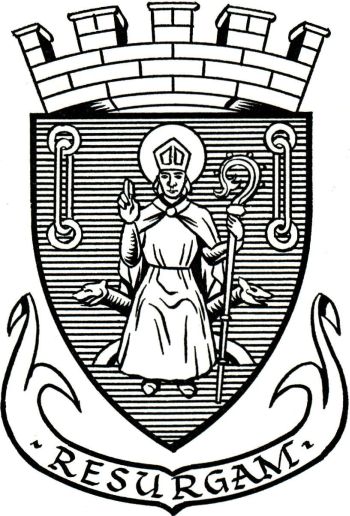 Azure, the representation of the figure of Saint Ninian, seated upon a siege-dragonee, with his dexter hand raised in benediction and his sinister hand supporting his crosier all Proper, between two fetters paleways in chief Argent.

Above the Shield is placed a mural crown as befitting a Royal Burgh and in an Escrol below it this Motto "Resurgam".

The arms were officially granted on October 2, 1947.

Whithorn, the cathedral town of the old diocese of Galloway, was granted as a Burgh by King Robert I to the Prior and Convent of Whithorn in 1325.

The arms are a copy of the device on the Burgh seal, of which a fifteenth-century impression is on record. Using the blue and silver colours of Gallo­way, they show St. Ninian, the first known apostle of Scotland, who was born on the shores of the Solway Firth in the fourth century. He visited Rome where he was made a Bishop and also St. Martin at Tours, returning to Whithorn about 400 to found his famous "Candida Casa" and dedicate it to St. Martin. He then evangelised the Southern Picts and died "perfect in life and years" at Whithorn in 432. His shrine there was for many centuries one of the most celebrated Scottish places of pilgrimage.

The saint is vested as a bishop seated on a throne; on either side are fetterlock chains which may represent the evils he overcame by his teaching or may refer to some special sanctuary afforded by Whithorn Priory.

The Latin motto means "I shall rise again" and was chosen to indicate the Burgh's wish to relive its past glories.