From Heraldry of the World
Your site history : Wickede
Jump to navigation Jump to search 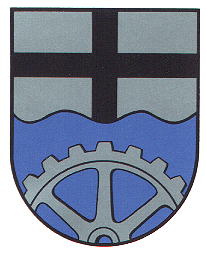 The upper half shows the black cross of the State of Köln, to which the town historically belonged.

The lower half shows a industrial wheel, symbol for the importance of (heavy) industry to the town. The wavy division line symbolises the Ruhr river that runs through Wickede. The colours of the lower half are derived from those of the County Arnsberg. The county was in the 14th century incorporated into the State of Köln.