Wigtown Burgh was merged into Wigtown District Council in 1975. In 1996 Wigtown Community Council was created, comprising the same area as the former burgh.

Wigtown Burgh did not have recorded arms. Only a seal was known. 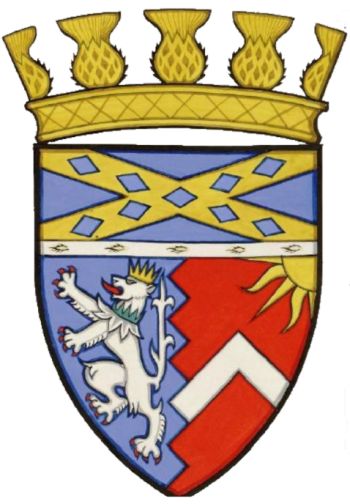 Per pale indented: dexter Azure, a lion rampant Argent, armed and langued Gules, crowned with an antique crown Or and gorged of an antique crown Vert; sinister, Gules, a chevron Argent and issuing from the sinister chief a quadrant of the sun arrayed Or; on a chief Azure, having a fillet Ermine, a salt ire Or charged with nine lozenges also Azure.

The arms are those of Wigtownshire with a different crown. 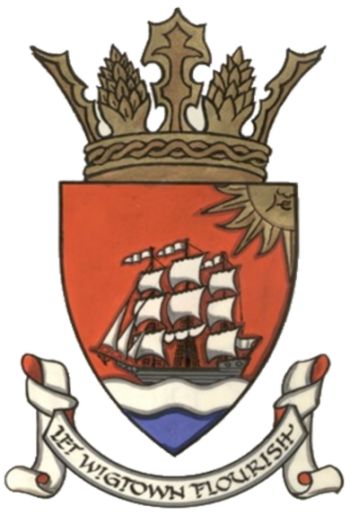 Gules; on the sea in base undy argent and azure, a three masted ship under sail and flagged, the centre lower sail reefed [furled], argent, and issuing from the sinister chief a quadrant of the sun in its splendour or

Above the Shield is placed a Coronet appropriate to a statutory Community Council, videlicet:- a circlet richly chased from which are issuant four thistle leaves (one and two halves visible) and four pine cones (two visible) Or, and in an Escrol below the Shield this Motto "Let Wigton Flourish ".

The arms are based on the old seal of the burgh, see above.