From Heraldry of the World
Your site history : Wilhelmshaven
Jump to navigation Jump to search 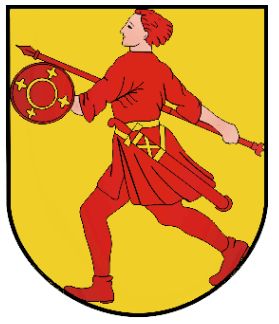 Wilhelmshaven became an important harbour at the end of the last century. In 1873 the town became a city and in 1919 its own urban district.

The first arms were granted on July 28, 1892 and are shown below. The arms showed two crossed swords over an anchor, all gold on a blue shield. Above the swords a small shield with the Prussian eagle was placed.

It took nearly 20 years for the arms to be granted for the new city. In the 1880s the city repeatedly contacted the State Heraldic Office in Berlin, without result. In 1891 the heraldic association “Zum Kleeblatt” approached the city with a design for new arms. The city agreed and the association organised a contest among its members. No less than 88 different designs were received and two of these were send to the Wilhelmshaven council. Counsellor Jess proposed during the meeting of July 2, 1891, the new design. The design showed the anchor and sword, indicating that Wilhelmshaven was a naval port. In addition there was an escutcheon with the letter W, as a reminder of the founder of the city, Emperor Wilhelm of Preussen. Finally the shield was crowned by the Imperial crown.

The assembled council did like the sword and anchor, but preferred the crown in the escutcheon instead of the letter W. Also, the local press supported the idea of a crown instead of the W.

After the incorporation of Rüstringen in 1937 new arms were needed. The city needed new arms, first the city was now part of the State of Oldenburg and therefore no longer Prussian, and there was confusion with the arms of the city of <a href=s/solingen|Solingen]], which also used an anchor and swords in blue. And of course the old city of Rüstringen should be represented in the arms. Already in 1937 different proposals were made, but none of these could be agreed upon by the council.

By early 1939 the city commissioned the design of new arms, which should be officially have been adopted before Hitler would visit the city for the launching of the Tirpitz cruiser on April 1, 1939. It was proposed to make Hitler honorary citizen of Wilhelmshaven and it was necessary to have arms on the document.

During the next few months many designs were made and help was asked from both the Oldenburg and the Prussian heraldic offices. Finally a design by Heinz Baumann, with sword and waves, was agreed upon and granted in 1939. The sword was taken from the old arms and also resembled the spear of Rüstringen. The waves symbolises the sea, but were also based on the Oldenburg arms. The arms were forbidden by the British occupational government in 1946.

Already in 1946 the council started the procedure for new arms for the city. Immediately the council agreed upon the old Frisian warrior of Rüstringen, but it was assumed that the British government would oppose the violent character. It was also proposed to change the name again into Rüstringen. In 1947 it was decided to apply for the warrior, but with the warrior holding a neutral shield, not with the arms of Oldenburg. These arms were granted in 1948 and are still in use.