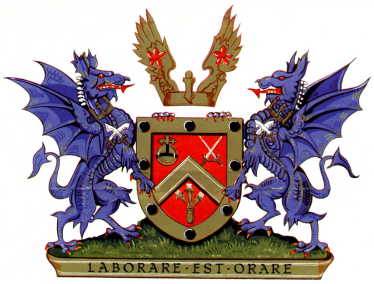 Arms: Gules a Chevron between in dexter chief an Orb ensigned with a Cross-crosslet Or and in sinister chief and two Swords in saltire proper hilts and pomels Or and in base three Lilies in a Pot all within a Bordure also Or charged with eight Pellets.
Crest: Issuant from a Saxon Crown two Wings Or each charged with a Cinquefoil Gules.
Supporters: On either side a Dragon Azure gorged with a Saxon Crown Or and charged on the shoulder with two Seaxes in saltire proper hilts and pomels Or.
Motto: 'LABORARE EST ORARE' - To work is to pray.

The orb is the emblem attributed to King Athelstan who, about the middle of the tenth century, granted the Manors of Neasden-cum-Willesden to the Monastery of St Arkenwold, while the eight black roundels indicate the eight Saxon manors into which Willesden was divided. The crossed swords are from the arms of the See of London, the Dean and Chapter of St Paul's having held the manor at the time of the Domesday Survey. The lilies are the emblems of St Mary, the patron saint.

The wings are taken from the crest of Archbishop Bancroft, whose family formerly occupied the Manor of Mapesbury, and the cinquefoils are from the arms of All Souls College, Oxford, which owns much land in Willesden.

The Saxon crowns and the seaxes on the dragons derive from the arms of the Middlesex CC, and represent the ancient Kingdom of the Middle Saxons.