From Heraldry of the World
Your site history : Woldegk
Jump to navigation Jump to search 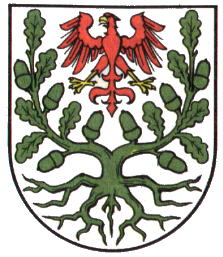 The arms show the eagle of Brandenburg and two canting oak branches. The name is derived from Waldeck or Waldeich, either wood-corner or wood-oak. Woldegk was founded around 1250 as a village and castle by the Margraves of Brandenburg to protect their lands. In 1298 it was mentioned as a city. In 1300 the city became a part of Mecklenburg. The arms are based on the oldest seal of the city, which dates from 1307, see image below. It already shows the same composition as the present arms. Although the size and shapes of the different elements have changed regularly during the centuries, the basic composition remained the same. The eagle of Brandenburg was retained during the centuries, even though the city has been part of Mecklenburg for over 700 years.