From Heraldry of the World
Your site history : Woltwiesche
Jump to navigation Jump to search 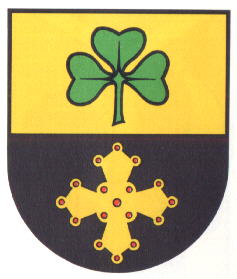 The arms were officially granted on December 20, 1952.

The clover leaf in the upper part is a canting symbol, the name can be derived from Wald-wiese, of forest-meadow. The leaf refers to the meadow part of the name. The base shows a bronze cross dating from the 9th century, which was excavated near the village. It symbolises the long inhabitation of the area.