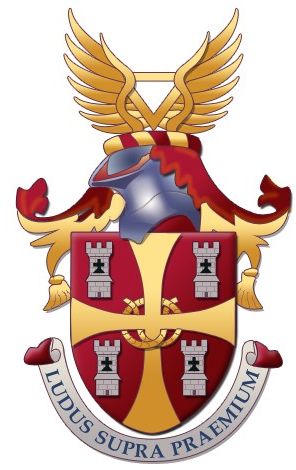 Arms: Gules, a cross formy throughout, interlaced by a Stafford knot Or, all between four towers argent each charged with an ermine spot sable.
Crest: On a wreath of the colours, Between two wings, a triangle, point downward, Or.
Motto: Ludus supra praemium

In 1960 the process for obtaining a grant of arms was started. By December 1960 the School had three provisional designs. In June 1961 a provisional design was submitted to the College of Arms, but in September of that year it was rejected as certain emblems in the design could not be used and the College of Heralds made alternative suggestions for the design. The school committee found the suggested alternative design to be wholly unsuitable and it took twelve months of negotiations with the College of Arms, during which time various modifications to the design were put forward, to get an agreement on the design. Finally in 1962 the design of the hat badge and arms were accepted.

The four towers symbolise the for Houses within the school.

The crest is a golden triangle, a symbol associated with learning, it is featured with the point downwards - a symbol of the feminine and the wings at the sides remind us that a school's task is to disseminate knowledge.

The motto 'Ludus Supra Praemium' can be translated as 'The school exceeds the reward' indicating that the school in itself is more important that the final result/prizes you may attain because of it. The school motto professes an idea that is rather the reverse of the idea of our school being an examination factory.