From Heraldry of the World
Your site history : Wood Green
Jump to navigation Jump to search 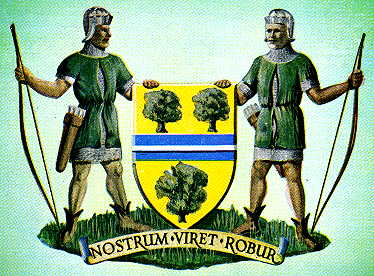 Arms : Or on a Fesse Azure between three Yew Trees eradicated proper a Barrulet Argent.
Crest : On either side an Archer in Chain Armour holding in the exterior hand a Bow proper.
Motto: 'NOSTRUM VIRET ROBUR' - Wood Green flourishes or Our strength is as a green tree

The arms were officially granted on August 1, 1933.

The bands of blue and silver represent the New River Cutting and the yew trees and archers symbolize the original Wood Green Common upon which our forebears practised the ancient sport of archery.