From Heraldry of the World
Your site history : Worcester (England)
Jump to navigation Jump to search 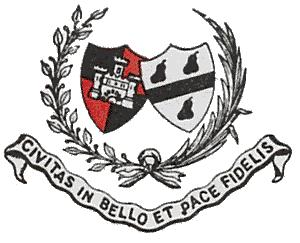 There has always been a lot of controversy surrounding Worcester's Coat of Arms and there have been many variations made during its long history. In 1864 the Coat of Arms was described as such;

"A quarterly sable and gules over all a castle triple towered argent on a canton of the last a fess between three pears sable".
Translated into everyday terms this meant a black a red shield divided into quarters with a silver coloured three turreted castle in the upper right-hand quarter with a horizontal stripe across the middle of the shield between three black pears.see image below. 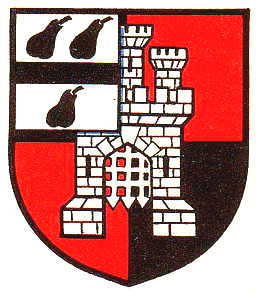 However until the beginning of the 17th Century the Coat of Arms displayed the castle alone but in 1634 the 'castle' coat was registered along with the coat bearing the black pears and were described as the ancient and modern arms of the City of Worcester.

Tradition has it that it was during the visit of Queen Elizabeth I to Worcester in 1575 that Worcester acquired its second coat of arms featuring the black pears. It is said that during her procession through the streets of Worcester the Queen saw a pear tree which had been planted in the Foregate in her honour. She was so pleased at the appropriateness of the tree growing right in the heart of a fruit growing region, that she bade the city add the emblem of pears to its Coat of Arms.

It may be legend too that the Worcester Archers rallied under the pear trees before the battle of Agincourt and it is interesting to note that the pear blossom was borne as a badge by the Worcestershire Yeomanry Cavalry from the beginning of this century until 1956.

The City's motto Civitas in Bello et Pace Fidelis - 'The City faithful in war and in peace' - is thought to refer to the City's support of the Stuart cause. In 1621 Worcester was granted a charter by James I declaring the City to be a county in itself, separate from the County of Worcestershire - 'The County of the City of Worcester'. This distinction came to an end with the reform of the local government in 1974.

Literature : Image and information provided by the City of Worcester.