Worshipful Company of Armourers and Brasiers

WORSHIPFUL COMPANY OF ARMOURERS AND BRASIERS 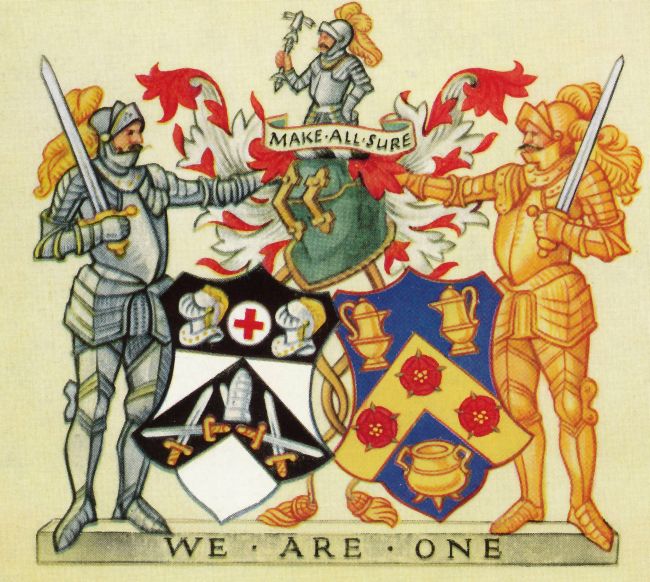 Arms: Argent, on a chevron sable a tournament gauntlet betweep two pairs of swords in saltire of the first, garnished, pomelled and hilted Or; on a chief of the second, on a plate between two helmets also argent, garnished gold, a cross couped gules.
Crest: On a wreath of the colours, A demi man in armour argent, garnished Or, open faced, holding in his dexter hand a mace of war proper.

To the above the Company customarily adds a second shield (accolle with the first), supporters and motto.
Arms: Azure, on a chevron Or between two ewers in chief and a two­ handled three-legged pot in base of the second, three roses gules, barbed and seeded proper.
Crest: On a wreath of the colours, A demi man in armour, couped at the middle of the thighs, all proper, garnished Or, the beaver up, on his head a plume of three feathers, two argent and one gules, round his waist a sash of the last, fringed of the second, holding in his dexter hand a sword erect of the first, hilt and pomel gold. Mantled gules, doubled argent.
Supporters: On either side a man in complete arm:our, the dexter proper garnished Or, the sinister all of the last, on their heads plumes of feathers, round their waists a sash, and each holding in the exterior hand a sword, all as in the Crest.
Motto: We are one.

The arms were officially granted on October 15, 1556. The second shield has never been granted.