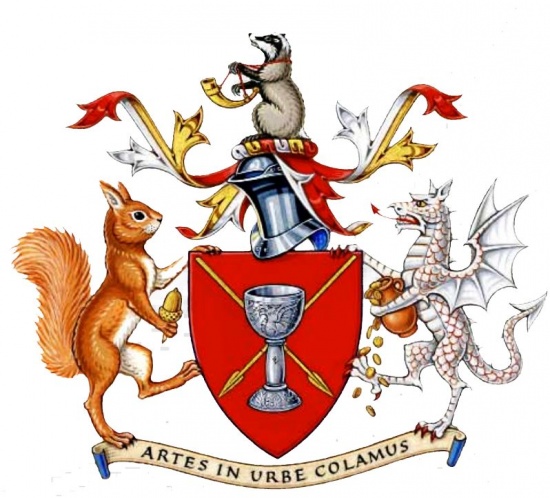 The arms were officially granted in January 2013, supporters were granted in 2014.

The arms are an allusion to the Company’s charity work – set with a depiction of the Horne Cup, the special silver goblet commissioned by the then Master, Philippa Glanville and the Court in memory of Jonathan. Behind the goblet are two crossed Roman spears – an allusion to the time when Roman soldiers advertised an auction of their chattels by sticking a spear in the ground – the Roman spears and the cup together is an allusion to Arts Scholars dealing with items from ancient to modern times.

The crest shows a “brock” (badger) holding a golden horn (Or) – a reference to the Company’s two founders, Lord Peter Brooke and Jonathan Horne.

The supporters, a squirrel and a dragon, symbolise two different aspects of the guardianship of the treasures of the past. The squirrel (who holds a golden acorn) is representative of the careful acquisitiveness of the collector. The dragon (a symbol of the City of London) cradles a pot of excavated Roman gold. Dragons are traditionally seen as fierce and vigilant guardians of treasure.

The Latin motto – ARTES IN URBE COLAMUS – translates as “We foster Arts (with)in the City” and was devised by our Founder Master Lord Brooke.

Literature : Image and info from http://www.artsscholars.org