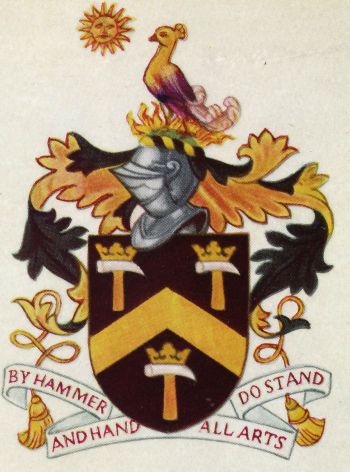 Arms : Sable, a chevron Or between three hammers argent handled and crowned with open crowns of the second.
Crest: On a wreath of the colours, A phoenix in flames rising proper.
Motto: By hammer and hand all arts do stand.

The Blacksmiths were first incorporated by charter dated 20th April 1571, and are referred to in the letters patent as the Art and Mistery of Blacksmiths-spurriers. The guild, however, started around 1299 and was probably established formally in the 15th century.

Among the ranks of the Blacksmiths were originally to be found gunsmiths and clockmakers until each of these crafts later formed independent associations.

The first grant of arms to the Blacksmiths was dated 12th April 1490 and was made by Sir Thomas Holme, Clarenceux. Unfortunately the original 1490 patent is no longer in existence, but the arms are described as "sable a cheveron silver betwene thre hamorys crouned gold. The crest upon a healme a fenyx in his proper colours, a croune of gold about his necke with a chayne, stondinge upon a Tarege [terrace] within a wreathe gold and sable."

The Blacksmiths' charter from 1571 includes in its elaborate illuminated border a painting of the Company's arms similar to the arms from 1490, except that the hammers are shown with the heads argent and the handles and crowns or. The latter rendering is supported by the illumination which decorates the second charter of 21st March 1605. It is thus clear that the only changes effected in the charges by the patent of arms of 1610 were the substitution of a chevron or for a chevron argent, and the omission of the chained crown from the phoenix of the crest which is made to stand in the rays of the sun.

An entry in the Company's accounts for the year 1609/1610 records the sum paid for the 1610 grant:
"Paied to ye herold att Armes for the renewing of the Armes of this Companye and to his man and for a dynner thereabouts £7"

This also describes the process as a renewal, confirming the 1490 grant.