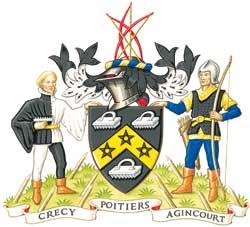 Arms : Sable, on a chevron Or between three floats argent as mariy pierced mullets of the field.
Crest: On a wreath Or and azure, Three bows bent gules stringed Or. Mantled sable, doubled ermine.
Motto: Crecy, Poitiers, Agincourt.

Supporters: On the dexter a young man of the early fifteenth century with fair hair and beard proper habited in a Doublet with pendent sleeves per pale Sable and Argent belted Or and Hose the dexter leg Argent the sinister Sable the Boots Tenny holding in the dexter hand proper a Float the teeth uppermost Argent and on the sinister side an Archer of the early fifteenth century the face hands and Steel Cap proper the Jack Sable set with studs of steel proper over a short-sleeved Undervest Or the Hose and Shirt-sleeves Azure the Boots Fenny grasping in the sinister hand a Longbow proper slung from the waist on the dexter side by a Belt Or a Sheaf of Arrows also proper
Compartment comprising a Grassy Mount set with ten sharpened Stakes of Wood those on the dexter bendwise sinister those on the sinister bendwise.

The arms were officially granted on November 10, 1488. The supporters and compartment were granted in July 1996. 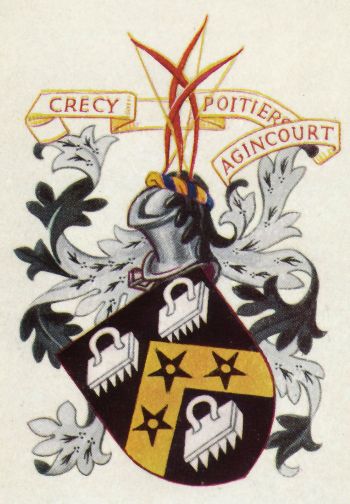