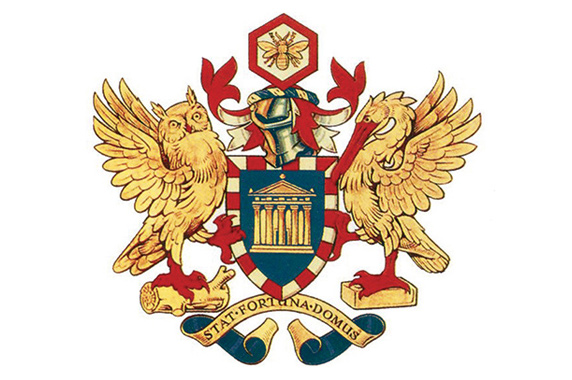 Arms:
Azure a representation of a Greek portico comprising five Doric Columns upon a Stylobate with Entablature and Pediment Or a Bordure compony Argent and Gules And for the Crest On a Wreath of the Colours A Bee volant Or within a voided Hexagon Gules Mantled Gules doubled Argent. On the dexter side an Owl wings elevated and addorsed Or armed and legged Gules the exterior claw resting on a Log Or and on the sinister side a Pelican wings elevated and addorsed Or beaked and legged Gules the exterior foot resting on a Brick Or.

Badge:
A Portico as in the Arms within an Annulet compony Or and Argent

The arms were officially granted in 30th October 1975.

The Arms The building is an example of the pure classical form, invented by the Greeks and still used to give a sense of permanence and grandeur. It consists of a stylobate, colums with doric capitals, a plain architrave surmounted by a frieze with triglyps and pediment with sculptured tympanum. It is coloured gold to denote excellence. The border represents bricks – the commonest building material.

The Crest The helmet is in silver with a mantling of red lined with silver – the colours of England and the City of London. This is surmounted by a bee within a hexagon, The bee being symbolic of a builders merchant in that he gathers the material together; it is also a symbol of industry, efficiency and celerity.

The Supporters These symbolise the educational and charitable activities of the Company. The owl is a symbol of learning and the pelican an ancient symbol of perfect charity. They are perched on a log and a stone representing other principal building materials.

The Motto The Motto ‘STAT FORTUNA DOMUS‘ is translated as ‘The fortune of the house continues’.