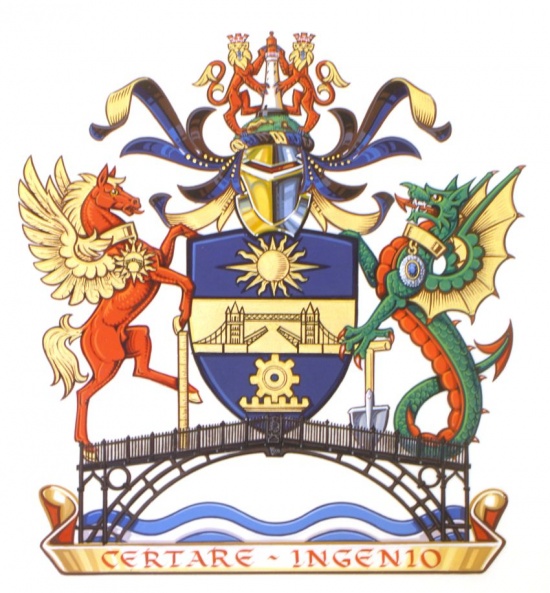 Arms: Azure on a Fess between in chief a Sun in Splendour and in base a Rack and Pinion Or a Representation of Tower Bridge Sable.
Crest: With a Wreath Or, Azure and Sable on a Mount Vert a Representation of Smeaton's Lighthouse Proper supported by two Lions Rampant Guardant each crowned with a Mural Crown, Gules the faces Or.
Mantling: Azure and Sable doubled Or.
Supporters: Standing upon a Representation of the Iron Bridge Proper a Pegasus forcene Gules wings, mane, tail and unguled Or its dexter hoof resting on a Measuring Stick Proper and suspended from a Collar Gold the Company Badge. On the Sinister a Wyvern Proper its sinister paw resting on a Shovel Proper and suspended from a collar Or the Badge of the Lord Mayor of London also Proper.
Motto: CERTARE INGENIO

The Shield is divided into three horizontal sections. The upper third shows the sun (representing energy) and it has sixteen rays; one for each of the sixteen institutions that went to form the Council of Engineering Institutions and whose members of the Fellow class are eligible to become Freemen of the Company. The middle third shows a representation of Tower Bridge indicating the close ties between engineering and the City of London. The lower third shows a rack and pinion representing the engineering and manufacturing skills of the Freemen of the Company.

The Supporters are a winged Pegasus and a Wyvern. The winged Pegasus (representing horse power and flight) wears the Badge of the Company and holds a measuring stick to represent some of the disciplines in which Freemen are engaged. The Wyvern indicates not only the link between engineers and the City of London but more particularly, as a tribute to the Founder Master who had the same Wyvern in his coat of Arms. The Wyvern is wearing the Badge of the Lord Mayor of London as the Founder Master was a Past Lord Mayor, and is holding a shovel representing other disciplines of the Freemen.

The Crest above the Helmet incorporates a representation of Smeaton's Lighthouse indicating the desire of the Freemen not only to bring light and guidance but also to show that they place safety above all. The Lighthouse is supported by two lions as a British symbol to indicate strength and firmness of purpose.

Literature : Image and info from http://www.engineerscompany.org.uk