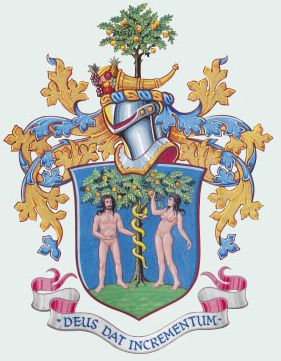 Arms : Azure, on a mount in base vert the tree of Paradise environed with the serpent between Adam and Eve, all proper.
Motto: Deus dat incrementum. (God gives growth)

These arms have not officially been granted, but re-confirmed by Letters Patent from the College of Arms in 1979.

The Company certainly existed in the fifteenth century for it is included in a list of misteries and trades compiled in 1422, and an ordinance of the mistery of Fruiterers was approved by the mayor and aldermen in 1463. On 9th February 1605 James I granted the mistery a charter of incorporation which gave it the right of supervision and search of the trade within the City and three miles radius, and other powers usual to the guilds.

There is no authorized grant of arms to this Company. Arms have, however, been borne by the Fruiterers since the latter part of the sixteenth century and, apart from occasional variations in the positions of Adam and Eve, have not changed since. The earliest certain example that has been found is contained in a manuscript of 1591.

In 1624 there is another drawing of the arms, in Harleian Manuscript 6860, and in 1634, Harleian Manuscript 1464, an Indian ink drawing of the arms appears with the following statement : " The Company of Fruiterers being a very ancient Brotherhood and of long continuance became to be first incorporated in the third year of the reign of King James: their arms were given them by ". Here the statement breaks off without recording by whom the arms were given, but in another part of this manuscript it is stated that several other companies were granted their arms by Sir Thomas Holme, Clarenceaux, between the years 1476 and 1490. If the Visitation recording these grants could be found, it is quite possible that the arms of the Fruiterers might be entered therein; unfortunately, no trace of it has yet been discovered. With the confirmation in 1979 the College of Arms acknowledged the mention grant mentioned above, but no image or actual grant was found.

The first motto adopted was Arbor vitae Christus, fructus per fidem gustamus. According to the Company's historian this was in official use until 1835, in which year the Company's notepaper was altered to show the present motto.

Literature : Bromley and Child, 1960; https://www.fruiterers.org.uk/our-history/; Gould : History of the Worshipful Company of Fruiterers, 1912