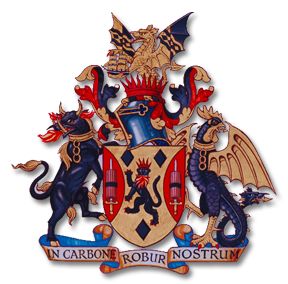 Carbon, or more correctly Hydrocarbon, is the molecular building block of all fossil fuel, whether Coal, Oil or Gas. The hydrocarbon molecule is also the basic building block of green fuels such as bio diesel. The diversification of energy sources, in to Nuclear and Renewables, such as wind and solar, whilst not strictly incorporated in the motto are nevertheless encompassed in the Armorial Bearing by the strong graphical references to energy, heat and light.

The shield has been derived from the Panther on the shield of The Coal Merchants’ Society with the addition of sable lozenges, or black diamonds, which are a feature of the armorial bearings of The Society of Coal Factor

The supporters have a carboniferous quality in that they are depicted sable, black, the colour of coal and crude oil and are in other respects heraldically appropriate to represent The Fuellers. The Dexter Supporter is a ‘Caretyne’ the name of which ‘Care Tyne’, suggests that the Tyne, or the area of the Tyne, where coal was produced should be safeguarded. The Caretyne and the Panther, on our shield are always, in heraldry, depicted with flames coming from their ears and jaws thus reflecting the interest that The Fuellers have in the production of heat, energy and light.
The Sinister Supporter, a ‘Cockatrice’, has the wings of a Dragon and a Dragons head at its tail end. Its name ‘Cockatrice’ by its first syllable provides a play upon another kind of fuel, Coke. Both supporters are shown with their heads ‘reguardant’, looking watchfully over their shoulders thus symbolising the care, which is a purpose of the Company of Fuellers, of necessitous persons engaged in the Energy industry. Each supporter is shown collared and pendant from each collar there is a chain of three links. These three links symbolise the union of the three groups who came together to re-establish the Company of Fuellers namely The Society of Coal Merchants, The Society of Coal Factors and The Coal Meters Committee.

Literature : Image and info from https://www.fuellers.co.uk/