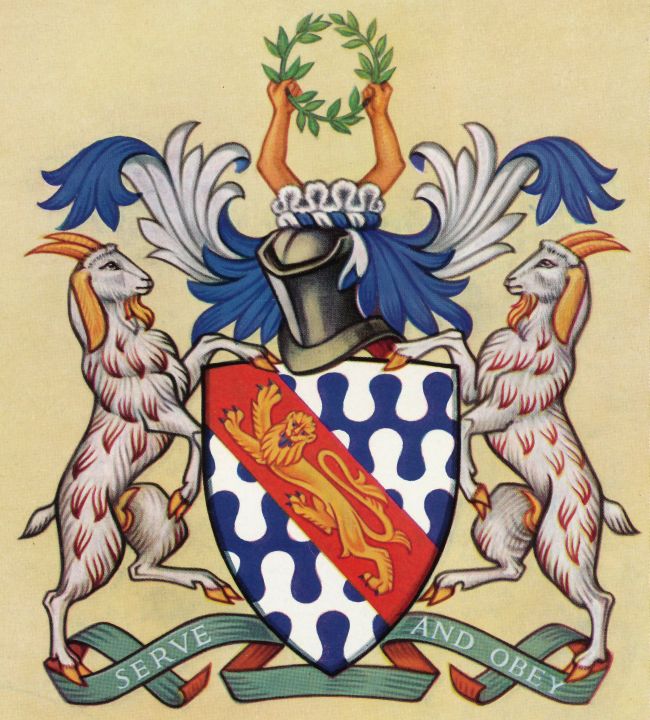 Arms : Barry nebuly of six argent and azure, on a bend gules a lion passant [guardant] Or.
Crest: On a wreath of the colours. Issuing from clouds two naked arms embowed holding a laurel wreath, all proper.
Supporters: On either side a goat of India argent. flecked gules, membered Or.
Motto: Serve and obey.

The arms were officially granted on 13 December 1503 to replace an earlier grant of 16 July 1446; the arms were confirmed and crest and supporters granted on 8 November 1570.

The name Haberdasher probably derives from a 12th century word 'hapertas', meaning an type of thick cloth worn under armour. Originally haberdashers thus probably made this type of garments, but the term was later used for craftsmen making hats, caps, purses etc. In 1503 the guilds of the haberdashers, hatters, cappers and hurers (makers of rough wool caps) were united by charter of July 6, 1503 to the new Fraternity of St. Katherine of Merchant Haberdashers. This indicated that the members were also engaged in trading, not only producing goods. However, in 1510 the word Merchant was removed after opposition by the other guilds.

The first arms were granted in 1446 and showed a chrveron with three Catherine wheels and three brushes above and below the chevron. The brushes are probably a symbol for the trade, St. Catherine was the patron saint of the guild.

In 1503 new arms were granted after the first merger of the haberdashers and the hurers. The new arms showed a shield with nebuly bars, probably indicating the international trade in which the guild was involved. The lion is the lion of England and symbolises the Royal patronage. The arms remained in use after the second merger in 1503 and the removal of the title Merchant in 1510.

In 1570 the crest and supporters were added. The meaning of the crest is not known, it seems to have been a common style for several guild arms granted by the Robert Cooke, Clarenceux (see the arms of the bakers, curriers and pewterers).

The goats probably are used as supporters as being a source of very fine wool.