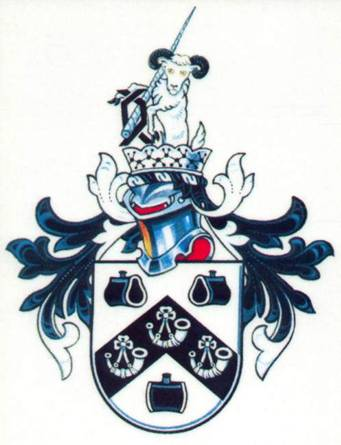 Argent on a Chevron, between three Leather Bottles the two in chief having their interior ends manifest all Sable a like number of Buglehorns stringed also Argent. And for the Crest upon a Helm with a Wreath Argent and Sable Issuant from a Circlet its upper edge invected of five cusps Argent charged with a representation of the Polyethylene Molecule Sable a Ram guardant Argent armed and unguled Sable supporting between its forelegs a representation of the Benzene ring also Sable enfiling the base of a Narwhal tusk all Argent ~ the upper end resting on the dexter shoulder of the same.

The leather-bottles refers to the incorporation of the Bottlemakers company into the Horners Company in 1476. The new crest refers to the Company's new interests in plastics.

Literature : Bromley and Child, 1960
Title image and blazon from here.