From Heraldry of the World
Your site history : Worshipful Company of Merchant Taylors
Jump to navigation Jump to search 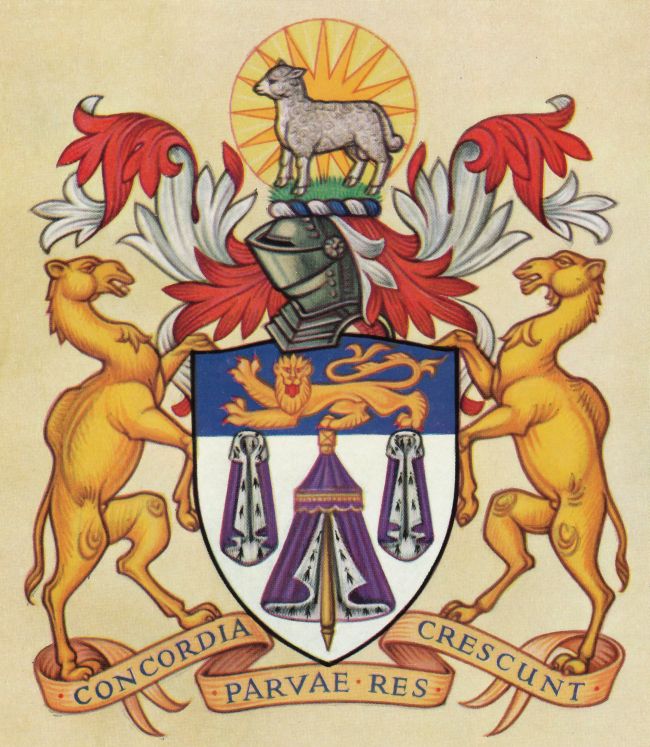 Arms : Argent, a pavilion imperial purple [i.e. crimson] garnished Or [lined ermine] between two mantles also imperial purple [lined ermine]; on a chief azure a lion passant [guardant] gold.
Crest: On a wreath argent and azure, On a mount vert a lamb argent in sunbeams Or. Mantled gules, doubled argent.
Supporters: On either side a camel Or.
Motto: Concordia parvae res crescunt.

The arms were officially granted on 23 December 1586 to replace an earlier grant of 23 October 1481.

The new grant substituted a lion of England for the holy lamb on the chief, and to replace the crest of Virgin and Child with a secular version of the holy lamb: "a lambe silver in the sonne beames golde"; the camel supporters were also added at this time.

While it is possible that suppression of the religious symbols was a late effect of the Reformation, it is at least equally likely that the change was due to a desire to conform to a more austere taste in heraldry. A number of guilds had expediently secularized their arms during the period of the Reformation, and as late as 1582 the Parish Clerks had sought a new grant because their arms were " over muche charged with certayne superstition ".

The arms show an pavilion and two mantles, both indicating the trade of a tailor. Initially the guild consisted of tailors and armourers, the latter making the inner, textile, layers of armory. But already by the time of the 2nd charter, many members were more merchants as tailors. The name, however, was not changed. The pavi­lion which survives in the current arms was no doubt inspired by the similar canopy in which the Virgin sits in the 1481 crest; such canopies of dignity are familiar accompaniments to religious personages in art, and are similarly used in the arms of the Upholders.

Both the ancient crest of Virgin and Child, and the holy lamb allude to the Company's origin as a fraternity of St. John the Baptist, deriving as religious emblems from the Gospel of St. John

The lion of England on the chief refers to the royal charter granted by Henry VII, and the royal patronage is alluded to by this royal charge.

The camels first appear as supporters in 1586, but it is clear that the animal was already an established symbol of the Company. A camel was in fact an habitual feature of Merchant Taylors' pageants in the sixteenth century, and it may be that the beast was intended as a reference to the eastern trade of the Merchant Company, as was the camel crest of the Grocers, but no evidence has been found to confirm this.

It has also been speculated that the camels are a further reference to St. John Baptist, who, according to tradition, often is shown as wearing a came fur cloak.

The exact origin thus is not clear.

The motto is a quotation from Gaius Sallustius Crispus: "Concordia parvae res crescunt, discordia maxumae dilabuntur", with harmony small things grow, while with discord the mightiest are ruined.