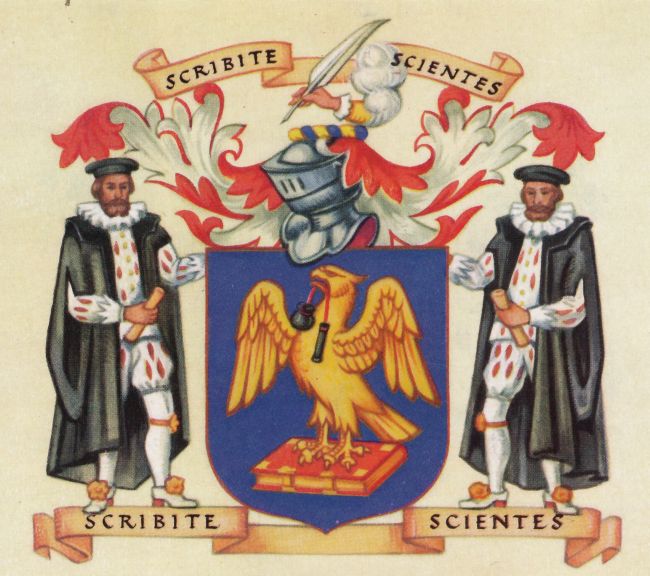 Arms : Azure, an eagle volant Or, holding in its beak a penner and inkhom sable stringed gules, standing upon a book gules garnished Or.
Crest: On a wreath Or and azure, A dexter hand proper holding a pen argent, the sleeve Or turned up argent, issuing from a cloud proper, over all a scroll bearing the motto 'Scribite scientes'. Mantled gules, doubled argent.
Supporters: On either side a councillor proper standing upon a scroll beneath the Arms also bearing the motto as over the Crest.

The arms were officially granted on November 11, 1634.

In 1373 those scriveners who specialised in writing legal documents - writers of court hand rather than writers of text - obtained the right to form a separate organisation, beginning the independence of the Scriveners Company. From the preparation of legal documents the Scrivener's business extended to include their interpretation and thence to conveyancing and by the middle of the eighteenth century he had acquired the functions of a notary.

The Scriveners Company used arms at least a hundred years before the grant of 1634 by Sir Richard St. George, Clarenceux. A drawing of a coat is contained in the collection "Two Ears of Wheat", a manuscript of about 1530 in the College of Arms, and shows it to be substantially similar to the later version of the arms. In the earlier version the eagle has a glory about its head and is clearly intended to be the eagle of St. John (the Scriveners' oath of 1390 was made "upon the holy evangelist"). The official grant, coming as it does after the Reformation, makes no mention of the glory about the eagle's head.