WORSHIPFUL COMPANY OF ARMOURERS AND BRASIERS 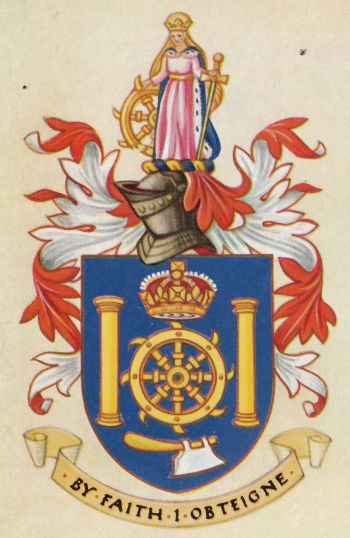 Arms : Azure, a Catherine Wheel between two columns Or, in chief an imperial crown Or and in base a hatchet fessewise to the sinister, head downwards, argent, handled Or.
Crest: On a wreath Or and azure, The figure of St. Catherine crowned Or, wearing a mantle azure furred ermine, holding in the dexter hand a Catherine Wheel Or and in the sinister a sword argent, hilted Or, the point downwards, [dressed in a pink gown beneath her azure mantle, with a gold girdle about the waist and a nimbus around her crowned head]. Mantled gules, doubled argent.
Motto: By faith I obteigne.

The arms were officially granted on December 17, 1634.

The Turners’ Company was already a guild in the 12th century. Some 200 years later, Edward III decreed that ‘wooden measures, as well for wine as for ale’ should be made only by ‘turnours’ with marks of their own – and the medieval turners established the English ‘pint’ as an official measure. In 1604 a Royal Charter was issued by James I to 'The Master, Wardens and Commonalty of the Mystery or Art of the Turners of London'.

Until the grant of 1634 the Turners had used the armorial device of a red shield with a golden a Catherine wheel; a narrative blazon of this occurs in a manuscript of 1587 and a rough sketch, without tinctures, is shown in a 1575 book by William Smith. However in Smith's edition of 1588 a different coat of arms is shown, again without tinctures; On a chevron between three planes three compasses extended, on a chief an escallop enclosed on either side by a hatchet and staff in saltire. No reason is known for this change and these arms have not been mentioned elsewhere.

From the evidence of other examples of the pre-grant arms, there is little doubt that the simple Catherine wheel was the device generally in use by the Turners. This spiked wheel was the instrument of torture from which St. Catherine miraculously escaped unharmed; it has consequently become the emblem of that saint. Because of her eloquence and learning St. Catherine is generally regarded as the patroness of students and philosophers, but she has also, as a result of her emblem, been adopted as the tutelary saint of wheelwrights and mechanics. Whether the emblem was used by the Turners on account of its traditional use by other similar crafts, or whether the Company was originally founded as a fraternity with vows to St. Catherine has not been determined.

Many of the medieval guilds began their lives as religious brotherhoods, and there are records of the saints to whom they owed their respective devotions, but no such evidence has been found in the case of the Turners. The strong emphasis on St. Catherine does indicate this medieval origin though.

The other charges of the arms, the hatchet and the columns, represent an implement of the craft and one of the products of the turner's art.