From Heraldry of the World
Your site history : Wrexham County Borough
Jump to navigation Jump to search 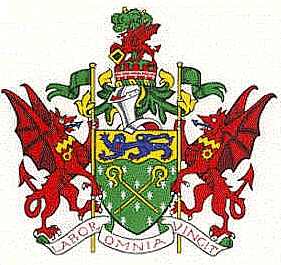 Arms: Vert semee of Ermine spots Argent two Crosiers in saltire on a Chief wavy Or a Lion passant guardant Azure.
Crest: On a Wreath Or and Vert out of a Mural Crown Gules masoned Argent a Mount Vert thereon in front of an Oak Tree proper fructed Or a Dragon passant Gules resting the dexter forefoot on a Lozenge Sable fimbriated Or.
Supporters: On either side a Dragon Gules gorged with a Collar dancetty and supporting with the interior forefoot a Staff erect Or flying therefrom a forked Pennon Vert the dexter dragon charged on the shoulder with the Astronomical Symbol for Mars and the sinister with a Cogwheel Or.
Motto: 'LABOR OMNIA VINCIT' - Hard work overcomes all things.

The arms are those of the former Wrexham-Maelor District Council.