Difference between revisions of "Yemen"

From Heraldry of the World
Your site history : Yemen
Jump to navigation Jump to search

As fas as I know no civic arms have been used in the country.

The national symbol shows a golden eagle with a scroll between its claws. The scroll displays the name of the country in Arabic. The shield on the eagle shows a coffee plant and the Marib Dam, similar to the former North Yemen symbol. The flagstaffs on the right and left of the eagle hold the national flag. 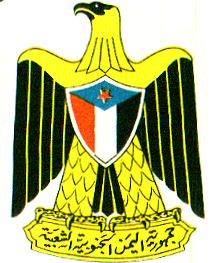 The arms show the national flag with the eagle of Saladin as supporter. 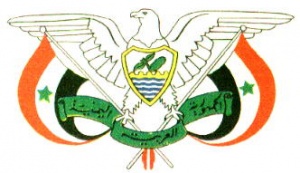 The arms show the coffee-tree over the Marib-dam, which is essential for the irrigation system of the country. The eagle represents the strength of the people of Yemen.