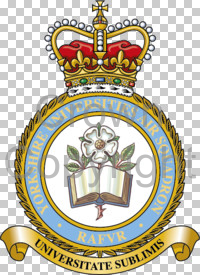 In front of a rose argent barbed and seeded Or slipped brown an leaved vert an open book azure/Or/argent.
Motto: Universitate sublimis = Allrised on high.

The Rose alludes to Yorkshire and the Book to the Universities. The badge was granted in October 1972.