From Heraldry of the World
Your site history : Zülpich
Jump to navigation Jump to search 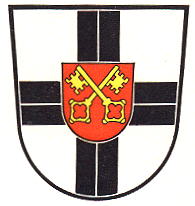 Zülpenich received city rights in 1254 from the Archbishops of Köln. The oldest seal showed St.Peter, the patron saint of Köln, standing on a gate. The second seal, known from 1270 shows the saint holding two crossed keys and a model of a city in his hands. The contra-seals however, show only the cross of the State of Köln.

After 1288 to the cross on the contra-seals a small shield with the arms of Jülich is added, as the town became a possession of the Dukes of Jülich. From the middle of the 17th century the city is known to use the present arms, which combine the cross of Köln and the keys of St. Peter.