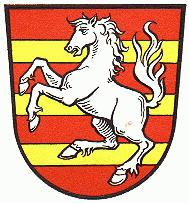 The arms are derived from the arms of the town of Zellerfeld, with the addition of the three bars behind the horse of Niedersachsen. On the arms is officially placed a helmet with as crest the horse between miner's tools. The tools indicate the mining in the area since the early 13th century.